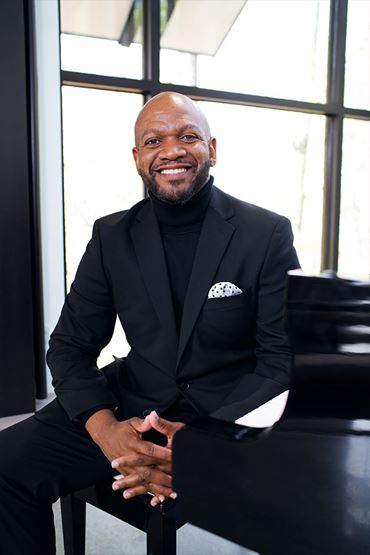 Dr. Jeffrey Allen Murdock is internationally known as a conductor, clinician, and adjudicator. He currently serves as Associate Director of Choral Activities and Assistant Professor of Music at the University of Arkansas where he conducts the Inspirational Chorale, the Men’s Chorus, and teaches courses within the choral music education curriculum. He is a 2016 Connor Endowed Faculty Fellow in the J. William Fulbright College of Arts and Sciences.

Dr. Murdock appears regularly in concert, recital, and stage performances, having previously conducted the Memphis Symphony Orchestra, the (Mississippi) Gulf Coast Symphony and has also performed as a soloist with the Memphis Symphony, the Mississippi Symphony Orchestra, and the Southern Mississippi Opera. Dr. Murdock’s love of scholarship and performance has led him to study and perform around the world. As a music educator, he loves to invest his knowledge and experience in the next generation of young musicians through clinic opportunities with secondary choral programs, conducting honor choruses, and mentoring choral music educators. Recent highlights include performances in New York, Madrid, Barcelona, Rome, and Lisboa. In 2013, he made his Carnegie Hall debut conducting the Millington Chorale in a well-received concert of diverse repertoire. The evening concert featuring the ensemble was praised for its preparation and the ensemble’s maturity of sound.

While Dr. Murdock is an accomplished classical musician, he is also a skilled Gospel musician. He currently serves on the conducting staff of the National Baptist Convention, USA, Inc. and has collaborated with Gospel recording artists, including Donnie McClurkin, Richard Smallwood, Mary Mary, Marvin Winans, Marvin Sapp, Lisa Knowles, and Kathy Taylor.

Dr. Murdock’s research interests include cultural hegemony in choral music education, social justice in music education, culturally responsive pedagogy in music education, and music in urban schools. He has presented at the National Research Conference for the National Association for Music Education (NAfME) as well as the World Conference of the International Society for Music Education (ISME) – Glasgow, U.K. Dr. Murdock is also a frequent research presenter at local and regional conferences of the American Choral Directors’ Association (ACDA) where he serves on the national committee for diversity initiatives, and as chair of student activities for the state of Arkansas.

Dr. Murdock holds both Bachelor of Music Education and Master of Music in Conducting degrees from the University of Southern Mississippi and the Doctor of Philosophy degree in Music Education from the University of Memphis. In addition to NAfME and ACDA, his professional memberships include the ASCAP and the National Collegiate Choral Organization (NCCO). He is also a member of Phi Mu Alpha Sinfonia Fraternity of America, and Kappa Alpha Psi Fraternity, Incorporated.